ID
NEW SHARD SKIN ON FREE FIRE - DECEMBER 2019
Hello Maniacs, YoDa SL , a very famous League of Legends player and streamer , who is currently competing for the eSports Brasil Award together with our dear Cerol recorded a humorous video mocking the Free Fire community. In his video, YoDa comments: - Free Fire has been dominating the planet earth, they have dominated YouTube and live streams with more than 1 million horns watching simultaneously and are even trying to take Alok to the world of cattle. You are a Free Fire Maniac , you need to watch the video below to understand the case. In fact, I never saw a Free Fire youtuber belittle any other game, why do so many people try to reduce Free Fire? Unnecessary ... Several Free Fire stremers reacted and then YoDa himself tried to fix the "mess", made a video explaining the meme he created himself, but again it didn't go well. 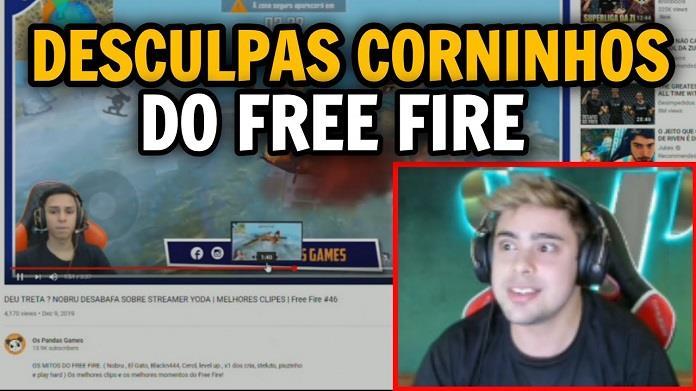 - I thought that was ridiculous. It was not necessary. He is a streamer participating in the eSports Award . But that's okay, right? Each one does it the way they want (...) We don't have to lower ourselves to the level of offending some streamer who is participating, a professional, let alone the community of a game. You are referring to thousands of people - said Nobru , during the broadcast. See here the video of Nobru and El Gato commenting on the subject.

- Do you think I'll stay there: "Guys, wow, vote for me, for God's sake". I have the greatest humility to speak, the greatest streamer of the year is Cerol . He started down there, did 200 hours of live, he's a monster. He's a happy guy, ”said El Gato .

YoDa , a lot of people may even understand your video justifying the "bullshit", but we don't! Even in your justification, you explain that Free Fire is a game for the poor, for kids who have nothing to eat, that they are managing to feed their mothers and that people stopped passing because of the game. You really are totally wrong about our community, make memes of subjects that you have mastered and for sure Free Fire is not one of them! To say that the eSports Brasil Award needs to change to your category not to participate in popular voting is something surreal, anyone over 12 can understand that you are desperate to be losing audience and awards for Free Fire. Finally, YoDa still irks the amount of followers of Free Fire influencers. "- numbers aren't everything!"
SHARE
KNOW MORE:
RECOMMENDED: LATEST NEWS: