Update arrived with some bugs, we will list the best known, follow here on Free Fire Mania!

ID
BUG LIST FOR DECEMBER UPDATE ON FREE FIRE
Hello Maniacs, The December update has arrived! Finally we can take advantage of the new features, even though we know that some have not yet arrived, there are many that are already available. In this update there is a lot of news that was not expected, after all, that was not scared by your character screaming during the striking, my opinion? I found it VERY cool! Apparently Free Fire is undergoing a makeover, focusing more on eSports, tournaments, something more professional and, particularly, I loved the changes. The new icons are a matter of getting used to, nothing that a few days of gambling does not solve, the new icons are now dynamic, they work far beyond a simple clickable image, now they show when it is being used, such as the icon of the backpack, which has a bar showing how busy it was. Some items have not yet arrived, like the new Kalahari Map that we warned would only arrive in January and the Notorious Character should arrive in the next few days.

During the update, some bugs appeared, some simpler and others more coarse and in urgent need of adjustments by Garena. Let's list the best known, if you have any more, leave your comment, although Free Fire Mania has no link with Garena, I'm sure the Garena team likes to read the constructive comments about the game evolution. 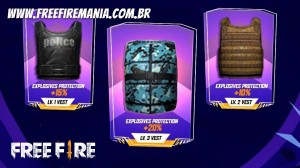