Garena caught Free Fire fans by surprise once again as the new December update, version OB31, was released today, December 1st. Mobile gamers expected the OB31 update to be released yesterday, but were disappointed when it didn't.

According to the Indonesian server tips, the update was expected for December 4th. However, the developers have revealed the server downtime for today, which implies that the December 2021 update , version OB31, will be released today (1) .

Every time a major update is deployed, the servers are shut down for maintenance. This is mainly done so that the servers run smoothly and players enjoy the latest update.

Maintenance time will start at 1:00 am and end at 10:00 am today. During those nine hours, users will not be able to enjoy Free Fire.

They can go to the Google Play Store and update Free Fire to its latest version, but they can't enjoy the game until after 10am. The arrival of the update on the Play Store depends on the device the player is using. As a result, players can use APK and OBB files to access the OB31 update earlier.

As per the update notes, here are some significant features players can expect in the latest update:

It is no longer possible to shoot through the force field.

"It is unquestionable that the Tunado Shield became the most powerful skill in Free Fire, mainly because it dominated the battle pattern thanks to its protective power that did not impede the offensive. The instantaneous and unilateral force field did not leave a gap available for opponents' reaction. To balance the dynamics, the forcefield has been updated to have a two-way effect. In other words, you won't be able to shoot opponents from inside the forcefield - unless you want to damage your shield from the inside .The duration of the forcefield, as well as its total health, has been increased to guarantee the squad's protection. We want the Tunado Shield to serve its original purpose, the defense."

New: The force field blocks all damage, both from within and without.

Change in time for the use of Medical Kits.

"We've recently improved the Gluttony skill a little bit, which ended up allowing players to stay on the gas longer. This ends up hampering gameplay, so we've scaled back that improvement a bit to ensure no one extrapolates from that strategy."

"Currently the Psychologist Mode in the Teacher's Lesson is a little too slow to ensure that the switch to Jiu-Jitsu Mode happens with enough energy. We've increased the power of this skill to allow you to keep life and energy balanced throughout. match."

"We've increased the accuracy of D-Boas so you can put that brake on opponents."

"Raising in the Strike is still not fast enough to generate relevant rescues in the match. We've reduced the time to raise teammates so that the squad recovers faster."

Lifting on the Beat :

"We've brought the Gladiators FF for a quick end-of-the-year visit! In this update, you and your opponent will take turns choosing combat weapons. Every two rounds, one of you will choose what will be available to both players. To win, you'll need to defeat your opponent not only in your comfort zone, but also in theirs. Do you think you have what it takes to crush it all? See you at the Steel Coliseum!"

Attention: the chosen weapons will be unavailable for selection for a certain time.

"The Steel Coliseum has become a little small to dispute them at x2. To account for the brave Free Fire troops, we've increased the size of the Coliseum so that you can do battle at will."

"Before Challenger, but after DM, we are happy to present the Elite rank. We know that the skill gap between those who have achieved the Master rank is growing. We have brought in a new rank to make the quest for the top more challenging and competitive ."

It is now possible to order multiple items at once.

"From now on you can order more than one item if the previous order was completed. Why? Well, why not?"

Adjustments on the map.

"There are moments of nervousness that are part of the adrenaline of Free Fire. Others, they are just expendable. An example of this is when we resurface at the bottom of Mill in CS. To avoid negative nervousness, we adjusted the points to resurface in Academy and in Mill to ensure the balance of battles in this area."

Added restrictions on the maximum amount of each item that can be carried. 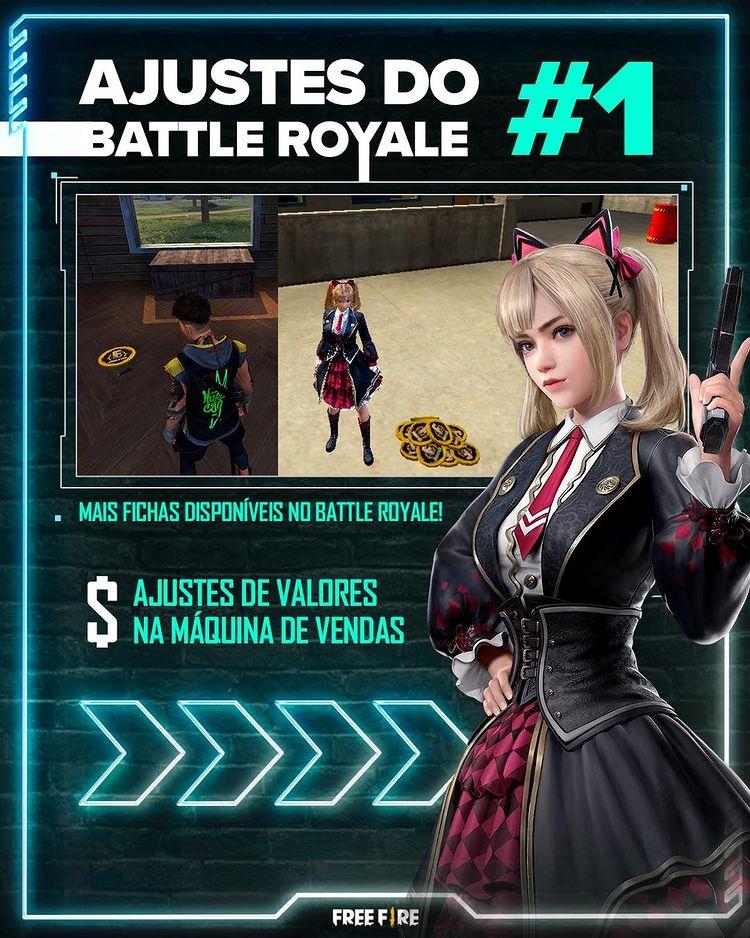 Value adjustments in the Sales Machine.

"FF Tokens are usually a little bit too rare as there is a limit of tokens available on the map. This has led to inflation. To solve this problem, we are making more tokens available in Battle Royale Mode."

"Introducing the new protection accessories that will be available in Battle Royale: The Helmet Thickener and the Vest Booster!"

"In this update we bring you the new MAC10 submachine gun. With its silencer attached, the MAC10 has firepower capable of penetrating even heavy armor."

"Some weapons have become too effective at long range, reducing the need to switch weapons throughout the game. As this sort of thing starts to spoil the fun, we've reduced the effective range of some weapons in the game."

Adjustments to the following weapons:

"It's been some time since the SCAR has become Free Fire's lowest-precision assault rifle. As this doesn't do this weapon justice, we've reduced its recoil to increase targeting efficiency after the first shot."

Reduction of recoil (crouching and lying down).

"Machine Gun Mode sacrifices a lot of mobility without offering much in return. To better reflect the purpose of this mode, we've increased the accuracy so you can sit down and shoot nonstop (in that little way you had envisioned)."

"Currently it's too difficult to get close to opponents carrying the UMP and XM8. To make the close-up game more viable and balanced, we've increased the time it takes to reload these weapons."

"The MP5-X is one of the rarest weapons on the map, yet its damage potential is well below other submachine guns. We've increased its cadence to make it a more attractive companion for the last zone."

"The Kar98k is probably the weakest sniper rifle in play right now, as its rate of fire makes it too difficult to make a sequence of attacks. To make it more viable at medium and short range, we've increased its rate of fire."

"Despite its low availability, the Groza is not as strong as other assault rifles. To make it more effective against fully equipped opponents, we've increased its armor penetration capability." "We can't deny that it's actually a little gun party at some points during the match these days. To make things warmer, we've added time to switch weapons. It's time to see who's really tough at switch time."

Assists will be shown on the HUD.

"Right now it's a bit difficult to identify when someone you've injured is shot or laid down by a teammate. In this update, we've added assistance notifications to let you know when someone has finished work for you. This will also give more visibility to that teammate who never finishes, but makes the booyah possible."

"Communication is everything, but words aren't always enough. Now you can mark pretty much anything on the map. You can also tap twice in a row to signal your teammates where your opponents are."

"Now you can take that peek around while skydiving and keep the HUD clean when it lands."

"Is it hard to choose what's your thing? Well, no more!"