ID
LEAKED? NEW ELITE PASS 11 - BLACK PEST
Hello Maniacs, the male / female skins, banners, parachutes, profile photo and weapon skins with the Black Death theme are already in the game files, which suggests that this is the new Elite Pass 11 - Black Death or some another very big event! But in fact we believe it will really be the new The new Elite Pass 11 - Elite Dragon Pass is officially out . The official images cannot be released yet, so the images published in this post are illustrative and similar to those that will arrive at Free Fire. One of the weapon skins will be SPAS12 , with the following description: One shell a day, keeps doctors away .
Attention! Post updated on 03/20: Everything we said in this post will enter the game, but not as an Elite Pass, but as a new PVE Game Mode, called Revolva Mortal . Click here and learn more!

Image of description SPAS12 no Free Fire
If the Elite Pass 11 is confirmed as the theme of the Black Death, there is a good chance that we will have the Male Skin as the Doctor of the Plague : During the Plague outbreak, these “health professionals” (doctors did not have a prestigious role) dressed in a sinister and peculiar way. They wore masks, cloaks, brim hats and gloves. The mask, usually black, had the shape of a bird and was used because it was believed that the pest spread through the air, through a "toxic cloud", the miasma. Some reports claim that the dark character of the suit could make the agent less attractive to infect the person. The mask had openings in the glass eyes and a beak where spices (mint, lemongrass, cloves ...), straw, perfumes and flower petals were placed, which served as a filter to prevent the miasma from entering the mask and to be able to withstand the constant smell of putrefying bodies. It is not today that games like Free Fire , PUBG and Fortnite copy the good things of each other, and this time the Elite Pass 11 - Black Death may have been inspired by Fortnite skins from a few months ago. 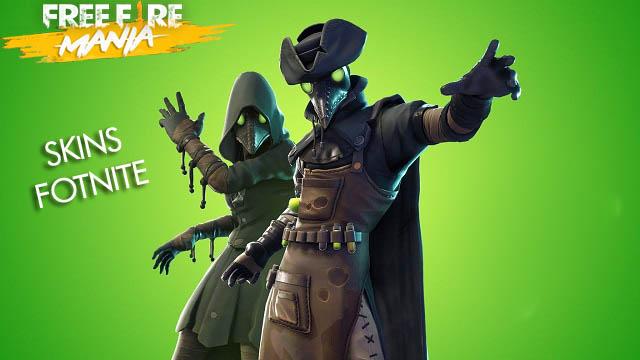