LBFF: See how was the 1st week of the Brazilian Free Fire League 3rd stage

ID
LBFF: SEE HOW WAS THE 1ST WEEK OF THE BRAZILIAN FREE FIRE LEAGUE 3RD STAGE


The Brazilian Free Fire League ( LBFF ) debuted with everything last weekend. A newcomer to Serie A , SS Esports did well on both days and spiked BOOYAH! three times in competition: once on Saturday and twice on Sunday, where he dominated both games in Purgatory . In the glue of the teams of Antunes, is the Black Dragons , who with a BOOYAH! on each day, it supported the good and aggressive campaign of the finals of the COPA Free Fire and secured the 2nd place.

Closing the Top 3, also at 200 points, is FURIA , which under the command of MEMGOD , one of the best individually on the weekend, managed to make good drops on both days. Further down the table appears Santos and GOD , two other teams that also proved to be strong opponents in the fight for the title; as in the Free Fire Giants , General and his troupe continue fighting over positioning, while Santos proved to be a more aggressive team.

Rookie, Los Grandes closed the week in 6th place and confirmed the presence of all the teams in Group A in the first places. Meanwhile, the balance between the teams in Groups B and C was present; in 7th place, paiN Gaming ended, which follows the same style as the recent championships. Renovated, Cruzeiro gained strength with the entry of the duo "Cebotiva" and appears in 8th, followed by Team Liquid , which even making two BOOYAH! in Purgatory in the debut round, it had its lowest moments.

RED Kalunga and LOUD , current champions of the Free Fire Giants and Copa America , respectively, appear next. Wanheda commented after the jumps that the week was a study for Matilha, and the same was evident in the case of LOUD , which made several substitutions, keeping only Will and Noda as starters.

Fear , Corinthians and INTZ had their good times, however instability prevailed and none of the teams reached 100 points. Flamengo B4 , Vivo Keyd , KaBuM! and New X Gaming were the worst of the weekend.

See below how the table looks at the end of Week 1 and click here (Saturday and Sunday) for the highlights of the falls. 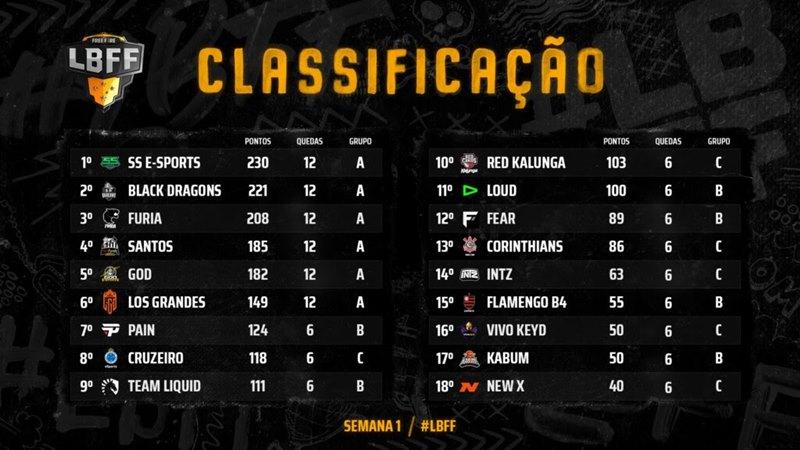 Held entirely online and broadcast on Youtube and BOOYAH! , Garena's streaming platform, the competition gathers the best teams from Brazil, in the dispute for the title and for places for the Free Fire Continental Series ( FFCS ), continental tournament that takes place on November 21.

With a total prize pool of R $ 100,000, the LBFF Series A brings together the 18 teams from the Free Fire elite, who face each other in six falls per day, among the maps of Purgatory, Bermuda and Kalahari . Click here to find out how the points system works.

The presentation is in charge of familiar faces from the Free Fire community, with Camilota XP and Murilo Show. Diego Hads, AnaXisdê and Luis Folha will comment on the matches, assessing the highlights of each fall. Pfonn and Solotov will bring analyzes of fall strategies and information. Meanwhile, Tawna will bring extra information from pro players and teams.

Fans who watch LBFF matches through BOOYAH! you can earn dropzins directly in the game.