Recently Garena released several clues about such a Bermuda Plan that will arrive soon at Free Fire and many people have created theories about what would happen with the game map.

Let's start with the image of the Map that was released without the names, now with the blank names inserted, does this remind you of anything? La Casa de Papel is Netflix's most successful Spanish-language series and in Brazil, production has become the biggest cultural phenomenon, inspiring fantasies, music and many more. Any coincidence with Free Fire ?

Both productions, the series La Casa de Papel and the game Free Fire , have been successful worldwide, but their largest audiences are in Latin America and other countries in common.

The La Casa de Papel series has 4 seasons and the 5th is scheduled for 2021, if the pandemic does not hinder the production company's plans. 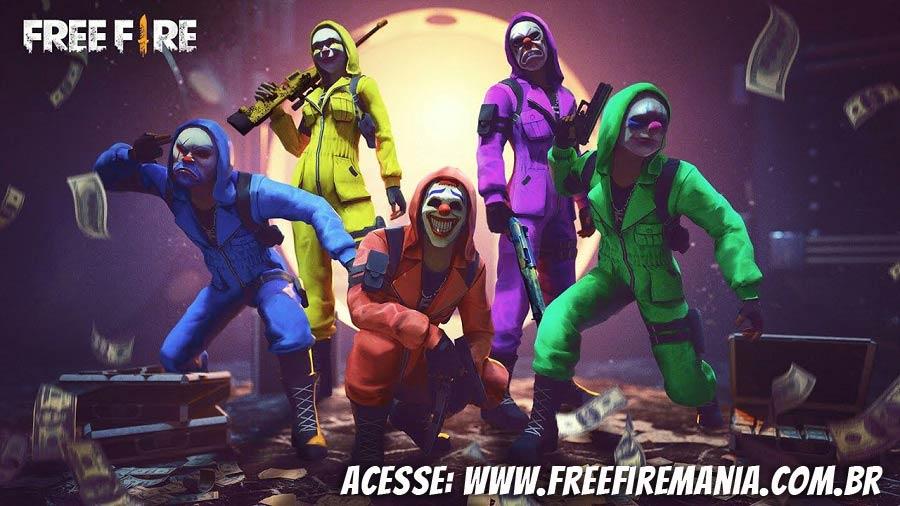 At the end of 2018, Free Fire brought the Top Criminal skins, inspired by the La Casa de Papel series and which many players ask for the return of the skins, which, it seems, the return is very close.

Check out the Top Criminal skins that arrived in 2018: Calamity, Problem, Wild and Mischief.

We recently made a publication that talks about the Meteors that are falling on the Free Fire shorts map . Fans of the La Casa de Papel series know, there is no shortage of explosions. So the explosions that are happening on the map of Bermuda may indeed represent a spoiler of the partnership between the series La Casa de Papel and Garena .

The Free Fire developers have already confirmed that we will have changes to various cities on the Free Fire Maps , but not necessarily the names of Tokyo and New York as we had previously predicted.

The Top Criminal incubator has huge chances of returning and new skins with the theme should arrive in the game, in addition to a great event related to the Bermuda Map and scheduled to be announced on the next day 25/07.

We have deciphered the Bermuda Plan , although nothing confirmed by Garena , the company should soon announce its new partnership with the series La Casa de Papel .