ID
CHOOSE YOUR FREE CHARACTER ON FREE FIRE
Hello Maniacs, The Free Fire World Series is coming and Garena has prepared several surprises for the players of the Brazilian server. Share it with all your friends! On the 16th of November, the day when the Free Fire World Finals will take place, Garena will release 1 free character for Brazilian players. And this time it is not those repeated characters that almost everyone already has, they are recent characters and are achieved only with Diamonds . Players will be able to collect their character for free on November 16!

Choose one of the characters, it's free 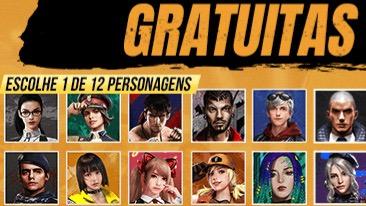 Among the characters that can be collected for free are the darlings: Rafael , Moco and Laura .

Rafael is a mercenary, he has a native ability that cannot be shared with other characters, which allows him to attack without being exposed on the map. Ability: Silent Death - You will not be revealed on the mini-map for 8 seconds

Moco is a hacker, she displays the position of her enemies to all of her allies. Skill: Hacker Eye - Marks the enemy that Moco shot for a few seconds

Anyone who knows me knows, Laura is my darling, Laura is a secret agent! Ability: Sharp Sniper - More accurate shooting when opening the Mira Comment there, which character will you collect?
SHARE
KNOW MORE: Free Fire Character Boy Rafael Laura
RECOMMENDED: LATEST NEWS: